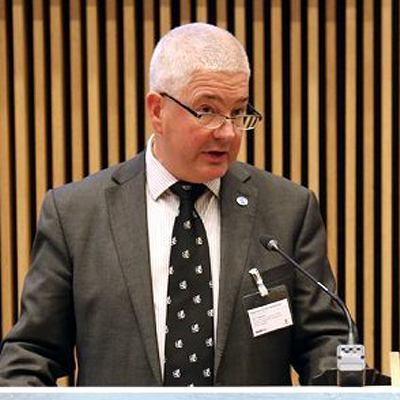 Chris Trelawny was commissioned as Deputy Secretary General of INTERPORTPOLICE on 1 January 2022. Prior to that, he spent 18 years in the International Maritime Organization (IMO) Secretariat working with Governments, IOs and NGOs on maritime security, maritime development and the sustainable blue economy.  He was Acting Director of TCD for most of 2020.  Prior to that he focussed on multi-agency approaches to maritime safety, security, facilitation, situational awareness and related issues, including migrant smuggling. His major projects have included writing and delivering the IMO maritime security “Train the Trainer” course, the counter-piracy Djibouti Code of Conduct (DCoC), the Yaoundé Code of Conduct, and the Jeddah Amendment to the DCoC, 2017.

Having served for 30 years as a naval reservist, Chris has also worked closely with navies on issues relating to maritime safety and security operations, counter proliferation and civil/military cooperation.  In 2004 he was awarded the UK’s Merchant Navy Medal.  Before joining IMO in 2003, Chris spent 10 years in aviation security roles and 8 years as a customs officer, serving at sea with both HM Customs & Excise and the Royal Navy.